At the end of September 2021, American blogger Safiya Nygaard talked about how she “wore” digital clothes for a week. In just two months, this video has been viewed more than 3 million times. The blogger wore clothes from the startup DRESSX and in the video she told how it was created, how people on her Instagram reacted to these wardrobe items and what she herself felt when looking at pictures in digital outfits.The influencer and her work is another proof that digital fashion has ceased to be an object of interest for gamers, geeks and startup creators, but has become a sustainable trend that ordinary people are becoming more and more interested in.

If until recently, digital clothing was familiar to gamers who put digital wardrobe items on their digital avatars, then in 2021 the trend has become massive. Digital clothing has become available to anyone, and not only gamers have begun to buy and use it.

What is digital clothing

Digital clothing can be different – dresses, hats, trousers, accessories, suits, that is, such that exists in real life or in the imagination of designers.

Digital clothing, depending on the scope of its future application, can take the form of a filter for a social network or a video conferencing application, a set of files for designing a game character, or just a snapshot that can be placed on a photo of a person and create a new photo. Often, digital clothing is available for viewing using various augmented reality tools.

Environmental friendliness, accessibility and openness to experiments will allow everyone to wear completely different digital clothes, and even those things that a person would never wear in real life.

Not only gamers and social media users are interested in digital clothing. Although it is these segments that have become not only pioneers in the development of the digital clothing market. It was in this environment that a lot of money began to be paid for digital wardrobe items. For example, gamers in Fortnite spend between $2 and $20 for “skins” – the design and clothing for their characters. But some of the more rare skins can cost gamers thousands of dollars, like the Skull Trooper Skin.

In 2018, Carlings launched the first digitally-only apparel. Moreover, the retailer immediately put this collection up for sale and 19 of its items were sold at a price of 10-30 euros.

The first digital clothing was created from photographs provided by customers. Carlings designers made a 3D model of the outfit based on the picture.

The success of their first digital collection encouraged Carlings to experiment further with digital clothing. In 2019, the brand created a graphic augmented reality t-shirt called the Last Statement T-Shirt. Created using Spark AR technology, the T-shirt can change its appearance under the influence of Instagram and Facebook filters.

Over time, other companies have joined the world of digital fashion. It is noteworthy that for some fashion brands, entering the digital clothing segment has been a continuation of their active work in creating clothing for in-game skins, among them Louis Vuitton and Balenciaga, who have successful experience in creating skins for Fortnite and League of Legends.

In addition to Carlings, other companies operate in the digital clothing segment. Among them, for example, the company from Amsterdam The Fabricant. In 2019, the brand sold a $9,500 digital haute couture dress created in collaboration with artist Johanna Jaskowska. Brad designs clothes for various retailers, and also sells outfits to customers in his online store https://www.thefabricant.com/shop. You can buy it as free FFROPS files or as non-fungible NFT tokens.

Croatian company Tribute positions itself as a creator of contactless cyber fashion, developing completely digital wardrobe items. The buyer provides their photos to designers, who put digital clothes on them, add design elements and give them back.

One of the most famous digital clothing brands is DRESSX, a startup created by Ukrainian women Daria Shapovalova and Natalia Modenova. In the summer of 2021, the company attracted investments of $2 million, which can be considered a success for a young project.

DRESSX customers cant try on digital clothes through augmented reality. To purchase, they need to upload a photo of themselves, then within a day or two, customers receive their photo with digital clothing – ready for publication on social networks.

Speaking to Vice about their startup, the creators emphasized that their goal is “to give everyone their own digital closet.” In addition to posting on social media, the creators of DressX believe that digital clothing will be needed in other contexts, such as being worn “on still images, on video calls, online conferences, and soon in games and other multiverses.”

At the HOT: SECOND outlet, located in one of London’s shopping centers, you can exchange boring physical items of clothing for digital ones.

Recently it became known that Nike plans to enter the digital clothing market. The sportswear manufacturer is ready to sell digital wardrobe items, for starters, to gamers on the Roblox gaming platform.

While the idea of ​​paying money for digital goods that you can’t get your hands on may seem strange, such objects have their own advantages. The very first and most obvious is a great invention for those who have to create creative images for social networks. Digital clothing will allow them to diversify their “bows” and look different every time.

Here are a few other benefits of digital clothing:

Environmental friendliness. Fast-changing fashion requires frequent wardrobe updates, and clothing production is a source of large greenhouse gas emissions. None of this applies to digital fashion. Clothes that are tired, at best, are sold in second-hand stores, at worst, they are simply destroyed. Updating your digital wardrobe will not only be cheaper, but it won’t be as bad for the environment either. DRESSX emphasizes that the total carbon footprint of the production of a single digital item is 95% less than a regular real item of clothing.
Speed. Digital fashion is fast. Creating a digital garment and delivering it to the end user will take much less time than tailoring a finished dress.
Versatility. Digital fashion implements the popular idea that anyone can wear any clothes – regardless of body type, gender, appearance. Digital clothing is easier to tailor to the consumer, making digital clothing truly versatile.
No restrictions. In creating digital clothing, designers are not limited by the physical properties of materials. For this reason, all of this opens the door for greater self-expression.

The British company Barclaycard conducted a study showing that almost 10% of people in the UK bought clothes to wear once, take a photo for social networks, and then return the purchase. For such people, digital clothing will help solve the problem of a beautiful appearance in social networks. In other words, influencers and bloggers are the main target audience of the digital wardrobe.

American futurist and expert Cathy Hack wrote about a year ago on her Twitter: “The next Coco Chanel is now about 10 years old and she already draws clothes for avatars in Roblox.” Cathy believes that the combination of Gen Z’s interest in games and their willingness to spend money on game artifacts will be one of the drivers of the digital goods market in general and digital clothing in particular. Therefore, the second segment of the target audience for digital clothing is gamers. People are used to spending money on in-game artifacts, including clothing for their in-game alter ego. Accordingly, they will be ready to buy for him not just wardrobe items drawn by an unknown person, but will also be able to fork out for digital toilets from well-known brands. 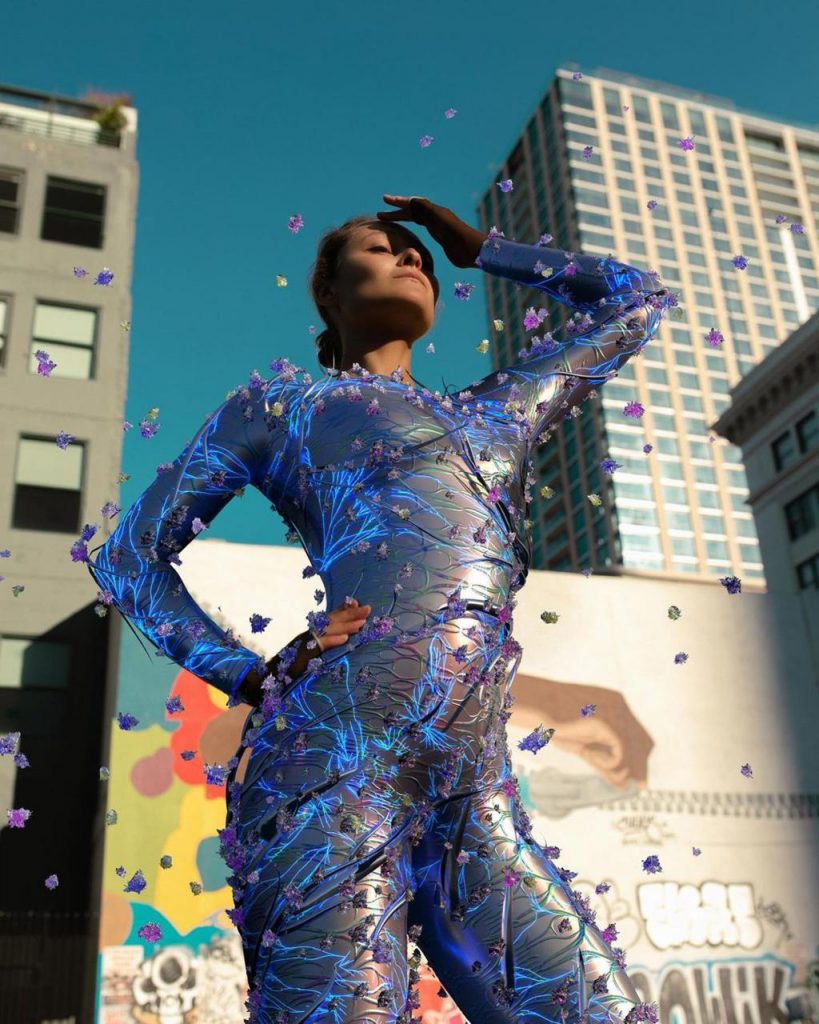 Experts predict that the market for “skins” for video games will reach $50 billion by 2022. And some especially popular skins for games are already being resold for thousands of dollars.

People who want to experiment and express themselves, but cannot afford it in real life, can be interested in digital clothing – for various reasons, from internal tightness, corporate requirements for appearance to financial restrictions.

Digitalization and virtualization of everything increases the audience of consumers of digital clothing. In times of remote work and study, digital clothing may be needed for ordinary people to participate in work calls, online conferences or other events. For this context, digital clothing saves money – you can not spend money on expensive items of clothing that have nowhere to wear, just buy a digital blouse or shirt and save money.

Manufacturers of ordinary, traditional clothing may also be interested in digital clothing. If they decide to test whether fragments of their future collection will be of interest to buyers, they can release their digital incarnations and put them up for sale. Such an assessment of the potential demand for a real digital audience will be cheaper and faster than